LONDON — Amid the continued recovery from the Omicron wave, India’s hospitality industry eclipsed pre-pandemic comparables in occupancy and average daily rate (ADR) for three consecutive days in the second week April, according to preliminary data from STR.

The three days (16-18) were the first of 2022 with occupancy and ADR above India’s 2019 levels. Using a 7-day moving average, occupancy and ADR have been above 90% of pre-pandemic comparables since late March. On Monday April 18, India recorded its highest ADR index of the year at 106% of the 2019 comparable. Occupancy surpassed pre-pandemic levels earlier in the year, reaching up to 109% of the corresponding level of 2019 on March 25. 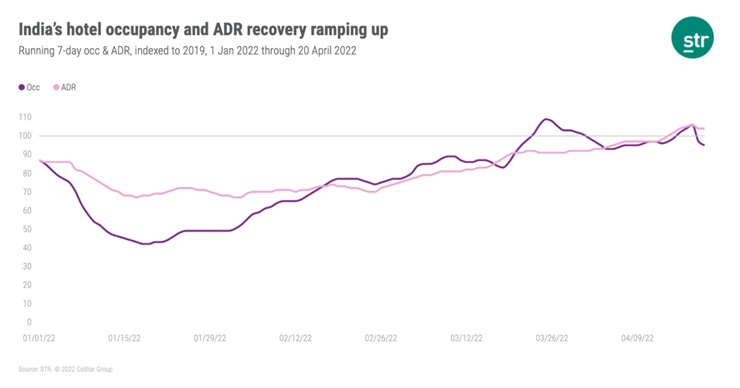 “With the Omicron wave behind us, traveler confidence has increased significantly and leisure destinations have continued the momentum of previous months,” mentioned Matthew BurkeSTR Regional Director – Pacific, Japan and South Central Asia. “Some leisure markets such as Himachal Pradesh, Goa and Uttarakhand saw significant occupancy levels throughout 2022, mostly exceeding pre-pandemic levels. Business demand, which was limited after the Delta wave, showed significant improvement after Omicron, with the momentum continuing through April. Although there have been early signs of rising COVID cases in some Indian markets, hotels in the country have so far shown resilience. The recovery from each wave has been better than the last, and we expect this trend to continue.